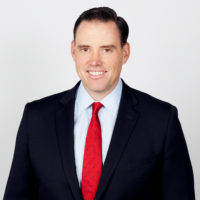 Lee Jones is a partner and wealth manager at Stratos Wealth Partners. In that role, he is responsible for developing and implementing diverse, strategy-based financial plans for his clients.

Mr. Jones has over 13 years of experience in the financial services industry and specializes in asset management with a focus on retirement and income planning. He is also well-versed in estate planning strategies, insurance, long-term care, small business and employer-sponsored 401(k) plans, 403(b) plans, and pension strategies.* He primarily works with executives, engineers, small business owners, retirees, and individuals in need of financial guidance during a divorce or legal settlement.

In addition to his overall knowledge and expertise in the financial planning arena, Mr. Jones also has a strong management background with a track record of success. Prior to joining Stratos Wealth Partners, Mr. Jones served as a senior financial advisor at Union Bank, where he managed three branch locations with over $100 million in assets under management. From 2008 through 2011, he worked for JP Morgan Chase, serving as a vice president and investment manager. In that role, he was responsible for the oversight of more than 30 branch-based financial advisors and his team led the Southwest region in sales.

Lee began his career in the bank channel in 1999, starting as a teller at Wells Fargo in Phoenix, Arizona. He was promoted to personal banker after only eight months and was then named branch manager in 2001, leading the most productive branch in Northern Phoenix.